Creating Minnesota: A History from the Inside Out 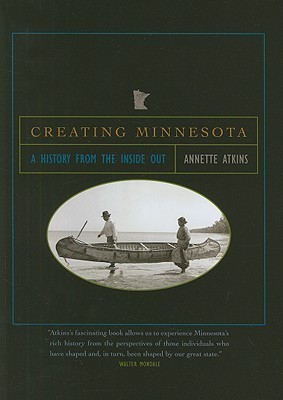 "Eminently witty and readable, this innovative history offers innumberable insights to students of Minnesota's past -- and perhaps most importantly, to all discerning practitioners of state, local, and public history. As a new model for such work, it deserves an audience well beyond the bounds of the North Star State."


From Chapter 1: The Shape of Water and the Feel of Trees
"Wherever one lives in Minnesota, 'going to the lake' is a sacred ritual. No one concludes there's just one lake; still, most Minnesotans refer only to 'the lake.' Oddly, they never mean the really big lake, Superior; they call that the 'North Shore," even though it's actually the lake's western shore, but never mind. It's all the other lakes they call 'the lake." Maybe they figure there are just too many lakes -- and so many with the same name -- that it's not worth identifying their particular one."

From Chapter 8: Making a Living, Making a Life
"The railroad shaped Mary's and other people's lives in multiple ways. Perhaps most subtly, it changed people's relationship to time. When mail took weeks to get from one place to another, people contented themselves with the wait. When the trains started to carry the mail and delivery time decreased from weeks to days, it seemed that people's impatience did not decrease, but increased. The railroad had the effect of making people more conscious of time and of the 'accuracy' of clocks. The tax records of the late-19th c. show an increasing number of watches among people taxable property."

From Chapter 12, Hanging on for Dear Life
At the beginning of the depression "What had been trickles of trouble turned into flash floods and lifted people like the Courts, the transient workers, and millions of others off their moorings. People, hanging on as best as they could, watched as their jobs, houses, and dreams floated away. Some failies lost their grip on each other and drifted apart. Some people themselves slipped under the water and did not come up."

From Chapter 16, Walleye Quesadilla & the New Minnesota
"The walleye is essentially Minnesotan; so, increasingly, are the quesadilla and burrito, sushi and teriyaki, pad thai and pho, Asian eggplant, bulgogi, injera, and lemongrass."